The Labor Saving Cake, otherwise known as a One Bowl Wonder, is a WWII-era recipe brought back to life with just a small tweak or two. It’s cute, it’s lightly lemony, it’s delicate, it’s easy and it has a nice history. The frosting is a Small-One-Bowl-Wonder of its own — with just a fork required to mix it up and slather it on. The buttery brown sugar coconut icing is gently broiled right into the top of the cake for a nice homey look and taste. We’re thinking it might be ideal for Sunday supper dessert or an awesome potluck contribution.

I opened my old Fannie Farmer cookbook to search for inspiration for an easy-to-make vintage cake. The goal was to find a fast-prep vintage cake recipe to balance out some of the more elaborate kitchen baking projects we have had going on here lately. What happens? Just as I open the book, a long, folded, yellowed newspaper clipping tumbles onto my lap. I say out loud, actually, “What’s this?” It was a series of recipes in a food column called, “Cook’s Tour With George Rector”. The last recipe in the article was called “Labor Saving Cake”. 🙂 Seek and ye shall find is how it happened.

Being a research hound, I checked up on George Rector a bit. I could see that his syndicated newspaper column originated in The Saturday

Evening Post in 1927 as “A Cook’s Tour”. (Could Anthony Bourdain have had George in mind when he created his 2002 TV series with this title?) 🙂 I found that Mr. Rector was a colorful character, known in broad circles at various times as a: law student, commercial spokesman, foodie, chef, food columnist, cook-book author, showman, hotelier, dining car cuisine director and restaurateur (with an equally intriguing restaurateur father, Charles Rector, who collaborated with him on many of his food projects). Folks loved reading his writings even after he passed away 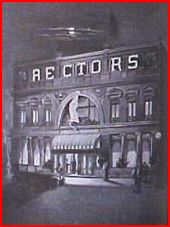 on November 26, 1947. In fact, people still read his books today. Some of the books he authored are: “The Rector Cook Book”, Rector Publishing Co., 1928; “Home At The Range With George Rector”, Rector Publishing Co., New York, 1939; and “Dining in New York With Rector”, Prentice-Hall, Inc., 1939. Alexander Kirklan wrote about Mr. Rector in “Rector’s Naughty 90’s Cookbook”, Doubleday, 1949, with a marketing slug that goes like this: “More than 400 tantalizing recipes, the majority hitherto unpublished of those famous restaurateurs, George and Charles Rector…Embellished with anecdotes and gossip concerning the glittering clientele, the celebrated personalities and gourmets of their day.”

My mom, Viola Geary Odell, in 1943 when she worked at the Voice of America in New York

In the 1943 cake recipe article that fell from the sky, Mr. Rector, explains that one of his readers sent the recipe to him a few years prior…so that means this recipe rises up from at least 1940. We may safely presume this is a WWII era (or earlier) cake used at a time when folks were interested in preparing home-baked goods for the table but without a lot of time on their hands. (I’m guessing we can all relate to that even now.) The traditional woman’s role in the home was altered during WWII, of course, with female workers replacing the mainly male workforce called away to military duty. According to Mr. Rector’s article, the draw of this cake is the fact that it can be mixed all in one bowl. I do notice, however, that the General Mills History site states that it introduced the One Bowl Method for streamlining cake making (including dispensing with the creaming of the butter and sugar and using shortening as a butter replacement) in 1943, a few years after the reader sent in the recipe (according to George) but the same year this article was published.

Likely the General Mills statement was true on a very large-scale during that era (though one-bowl cakes were around long before, like forever) — but maybe Mr. Rector, the wartime conditions and General Mills brought this fast prep method to the forefront. There are lots of variations on the theme of a one-bowl cake throughout history, especially during times of low resources, though most popular one-bowl cakes often lacked key ingredients, like scarce fresh eggs. So speediness is included in this recipe, yes. But, what seems unusual in an historical context about this 1940’s era cake is that it is being offered during a time when food rationing was common. George even talks about Victory Gardens in his article. So I’m thinking that this little cake, made with a good amount of sugar AND butter AND three fresh eggs, would have been considered an extravagant affair for its day — when resources were few and far between. Okay. End of your Cake History Lesson for today. You get an ‘A’. 🙂

We Tweaked the Recipe Just a Tad, Sorry, George: We think this recipe is just about right, although we substituted fresh lemon juice and lemon zest for the lemon extract called for in the recipe and we used unsalted butter, adjusting salt in the recipe. We also think the broiled icing works best when applied to a cooled cake, instead of to a warm cake as directed in the article. That way, the butter doesn’t instantly melt and soak in so quickly and allows a nuttier flavor and caramelization of the brown sugar and butter. Otherwise, we’ve left it all on its own to delight your guests in vintage style.

Traveling With Cake Ingredients: I packed up every single thing I needed in order to bake this cake at my mom’s house including a hand mixer. We tested this recipe for cake and frosting with some variations (like, using molasses and white sugar in the frosting instead of the brown sugar, more or less sugar in the cake, etc.), and we found the first recipe variation was the best — so that is what we are presenting below with step by step photo instructions in so that you may Bake This Cake. :).

Cake pan loaded with supplies for the traveling cake baker.

*Baking Pan Size Note: I didn’t have a 7×12″ baking pan so I used an old vintage pan with dimensions of around 9×12 (with slightly slanted and roughed-up edges) that held 13 cups of water filled to the brim) but I think you may substitute a 10″x2″ round or 9″x12″rectangle glass or metal baking pan (or smaller pan) that holds 5 cups of batter that will rise to at least 6 cups of volume up to 1/2 to 3/4ths full in the pan. Just check your proposed pan by filling it with 6 cups of water to be sure it will hold that amount with some room to move. A shallow pan for a nice low-level cake to be cut into square serving slices is the goal here.

Bring to room temperature in the microwave for a few seconds:
1/2 c unsalted butter (1 cube)

Beat in the mixer on medium high for about 3 minutes until light and creamed:
the room temperature butter
1-1/2 c sugar sugar

Beat into the butter-sugar mixture on medium-low speed:
2/3 c milk (2% is fine)

Beat into the batter in increments on medium-low speed:
2 c cake flour 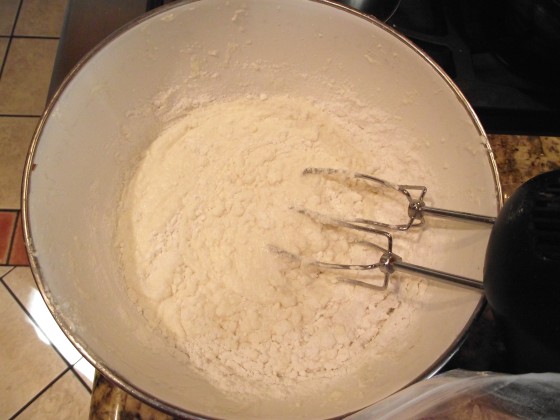 Beat into the batter until all is fully incorporated:
2 t baking powder
1/2 t salt
Note: We didn’t sift the dry ingredients together first — otherwise we wouldn’t have a One Bowl Wonder. 🙂 I think it works just fine this way with all the mixing going on. 🙂

(We’re about to beat in 3 large eggs but we’re going to do that one egg at a time.) 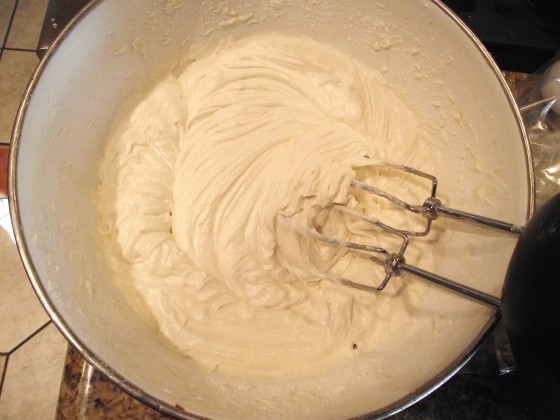 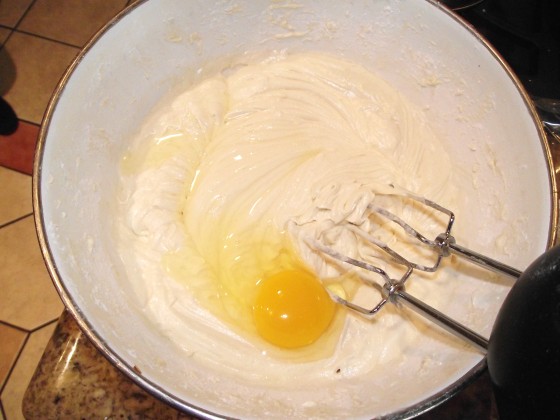 Pour the batter into the prepared pan: 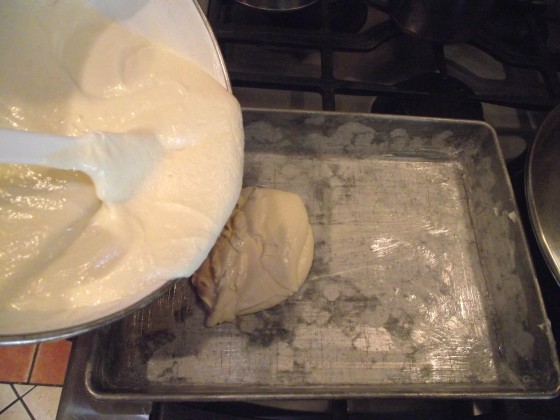 The batter filled this approximately 9×12 pan about half full…

Bake at 350 for 25 to 35 minutes until cake is golden and tester comes out clean.

Place the cake pan on a wire rack to cool.

Bring to room temperature in the microwave for a few seconds:
3 T unsalted butter 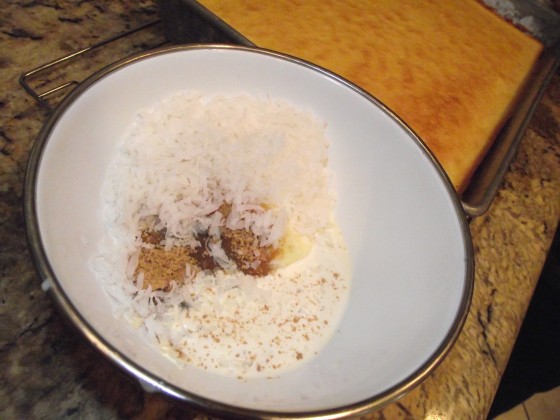 Mix all ingredients with a fork until fully blended.

Spread the coconut icing all over the top of the cake.

Tip: Although we followed the original recipe and spread the icing while the cake was warm, we tried it again (twice) and decided it is better to let the cake cool down completely before spreading it with icing so that the butter won’t quickly soak into the cake. It makes a nicer caramel topping when spread on a cooler cake. 🙂

Adjust the oven rack to sit fairly close to the top of the oven.

Broil the cake for 2 to 5 minutes in an open oven at strict attention, moving the pan as needed to obtain an even golden browning (but it doesn’t need to be perfect).

I recommend placing the cake a little closer to the top heating mechanism than I did in the photo below and watching it continuously with an open oven door, turning it a bit to get it evenly browned. I was baking in my mom’s oven and I couldn’t budge that middle rack up any higher in the oven — but it worked out fine. (It turned out to be easy enough when the oven was cold enough to fiddle with – after the cake was done. 🙂

This cake can be served pot-luck style straight from the pan but we scooped it out with a couple of spatulas while it was still a little warm to cool on a rack.

At serving time, we transferred the cake to a glass serving tray. 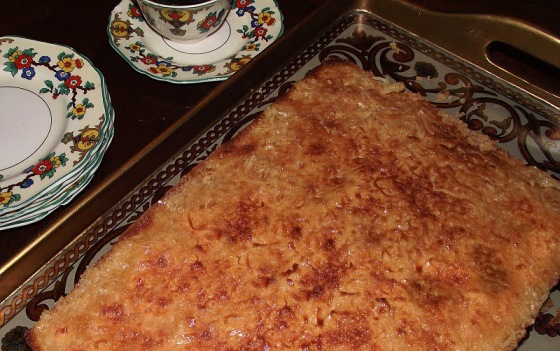 The Labor Saving Cake will serve about a dozen guests (or double helpings for six guests). 🙂 We served it with homemade pumpkin ice cream from our local Farmer’s Market but it would also be lovely with homemade vanilla ice cream, or a little sweetened whipped cream. However, my 90-year-old mom thinks it can stand alone. 🙂

And now it’s time to sit back, relax and enjoy the fruits of your labor saving.

Hope you enjoy! Thanks for all your well wishes and welcome to our new friends.

If you have the chance, let me know what you think in our comments section or on our Facebook Page.

Happy vintage cake baking to you! 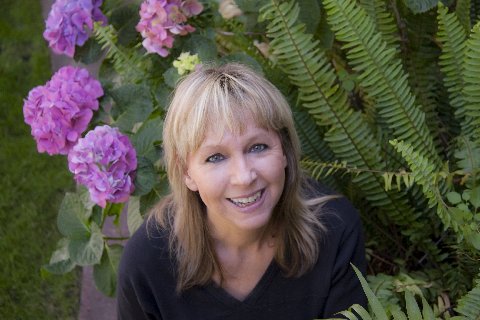 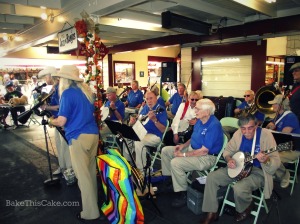 Palm Trees at the Beach

Related articles you may enjoy…

Follow Bake This Cake! on WordPress.com
Join 4,298 other followers 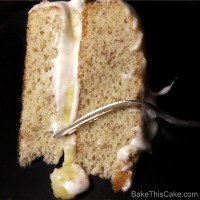 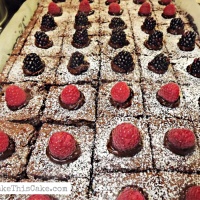 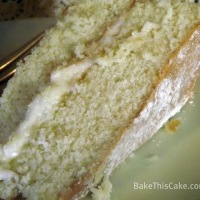